The Scene: Riding Out The Storm @ Hurricane 2015

“It always rains at Hurricane. Always. It’s in the name,” is one of the first things my camp neighbor Heinrich tells me when I ask about the weather. The very first thing he said was “Would you like a beer?”

I’m at the fourth stop on 100 Nights of Summer at the annual Hurricane Festival in the northern part of the country. I’ve only just arrived on a drizzly Friday afternoon along with what would turn out to be 63,000+ festival fans. Upon getting off the train in the sleepy farm town of Scheebel, I see that Hurricane festies do not pack lightly. It’s a Grapes of Wrath style migration with cases of beer perched precariously on luggage and tents and chairs and flags and guitars. Most of the handcarts can’t handle the weight swaying wildly from side to side. A girl next to me is carrying nothing. “Where’s your stuff?” I ask her. She points to a ten year old who is pulling a dozen bags in a cart. “I paid him ten euros.” 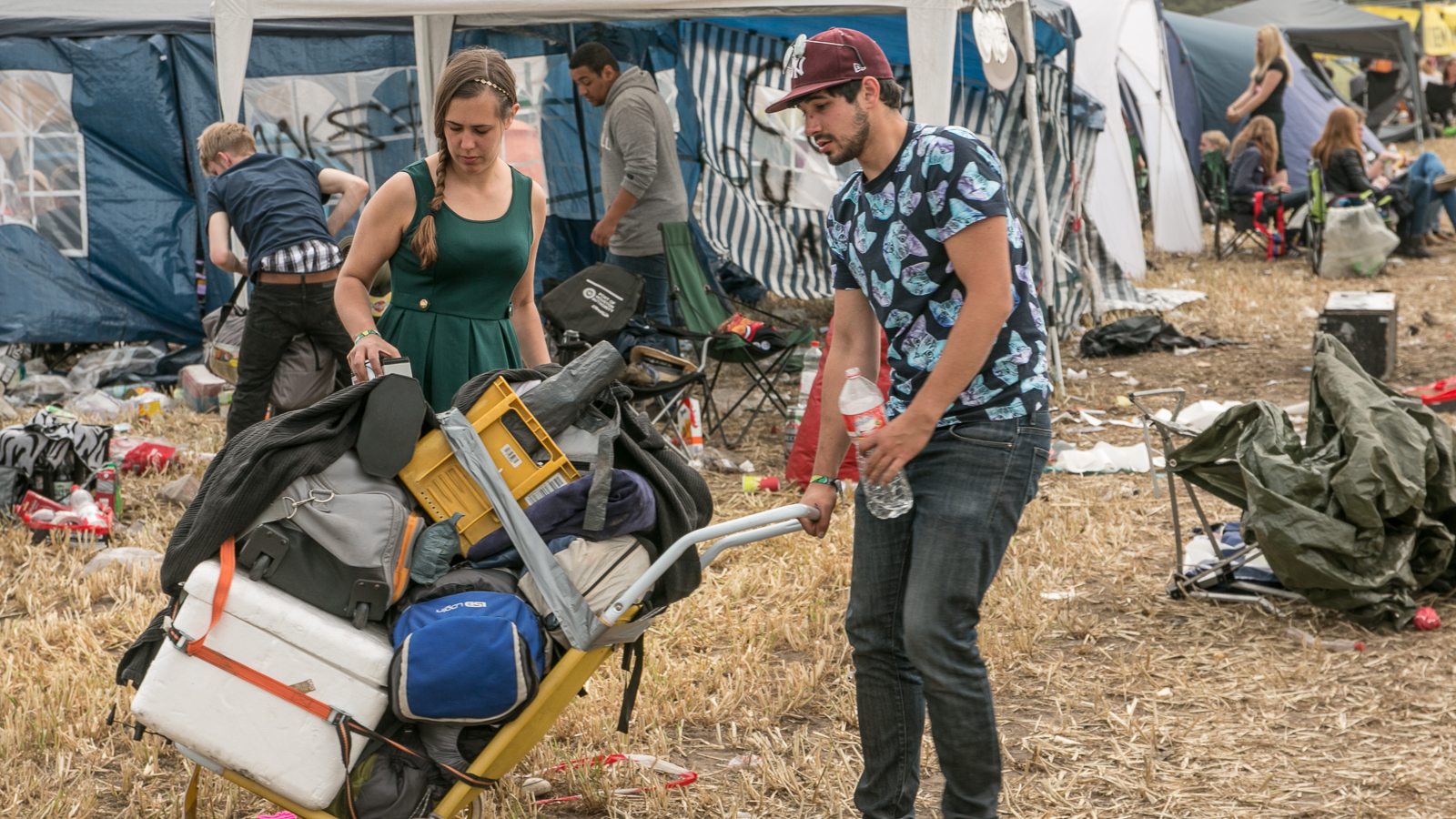 I’m not sure about where to pitch the tent at my campground. The first person I meet is a bubbly blonde named Ina who says, “Anywhere you want!” and asks me if I need any help. My other neighbor is Heinrich who offers me said beer. He’s been coming to Hurricane for sixteen years. “I live here,” he explains. I will come to find out in the early morning his crew sneaks back home for hot showers and power naps. After being “welcomed to Germany” with what they tell me is a traditional beer bong filled with three beers, I pull on a raincoat, and dive into Hurricane. 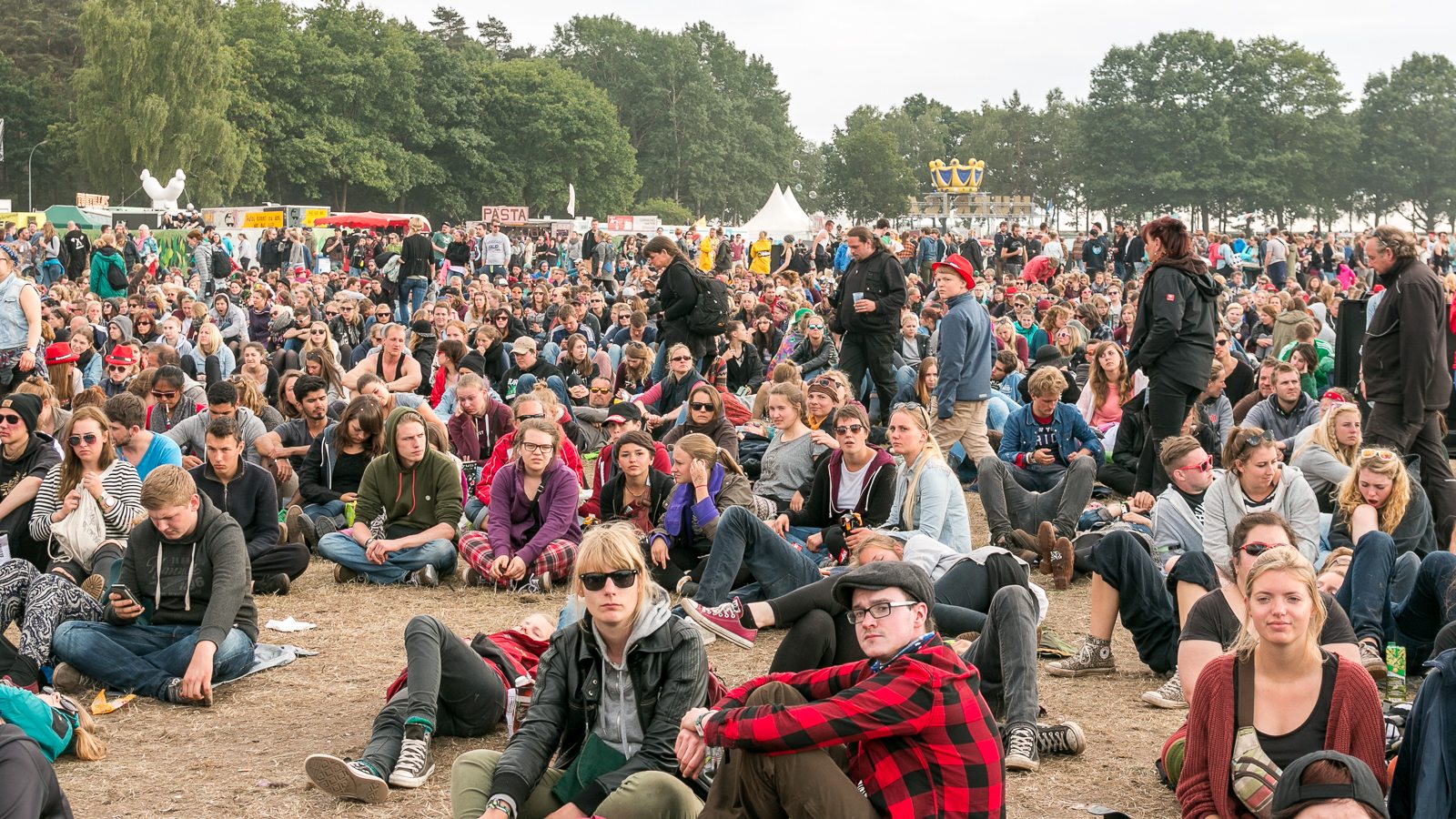 Hurricane is a smaller version of Bonnaroo. There’s three main stages and one large dance tent. There must be close to a hundred different food vendors with fairly reasonable prices. The day for me kicks off with the Counting Crows, mostly because I can’t believe the Counting Crows are playing a German festival. “This is one of our favorite bands,” a pair of nineteen year olds tell me. I wash out the aftertaste of the Crows with Danko Jones and a mosh-pit heavy set from the Darkest Hour. The Glitch Mob and Suicidal Tendencies both bring a smile, but my favorite act of the day has to the Parov Stelar Band. Based on the crowd reaction, I’m not alone.

There’s not many art installations, but Hurricane makes up for it with plenty of living art which appears erratically between stages — a column of smoking dragons with makeup clad warriors, a pair of pants with a suit coat, two barbarians riding a boar, and a haunting trio of bird skeletons provide more than a few double-takes from the crowd. 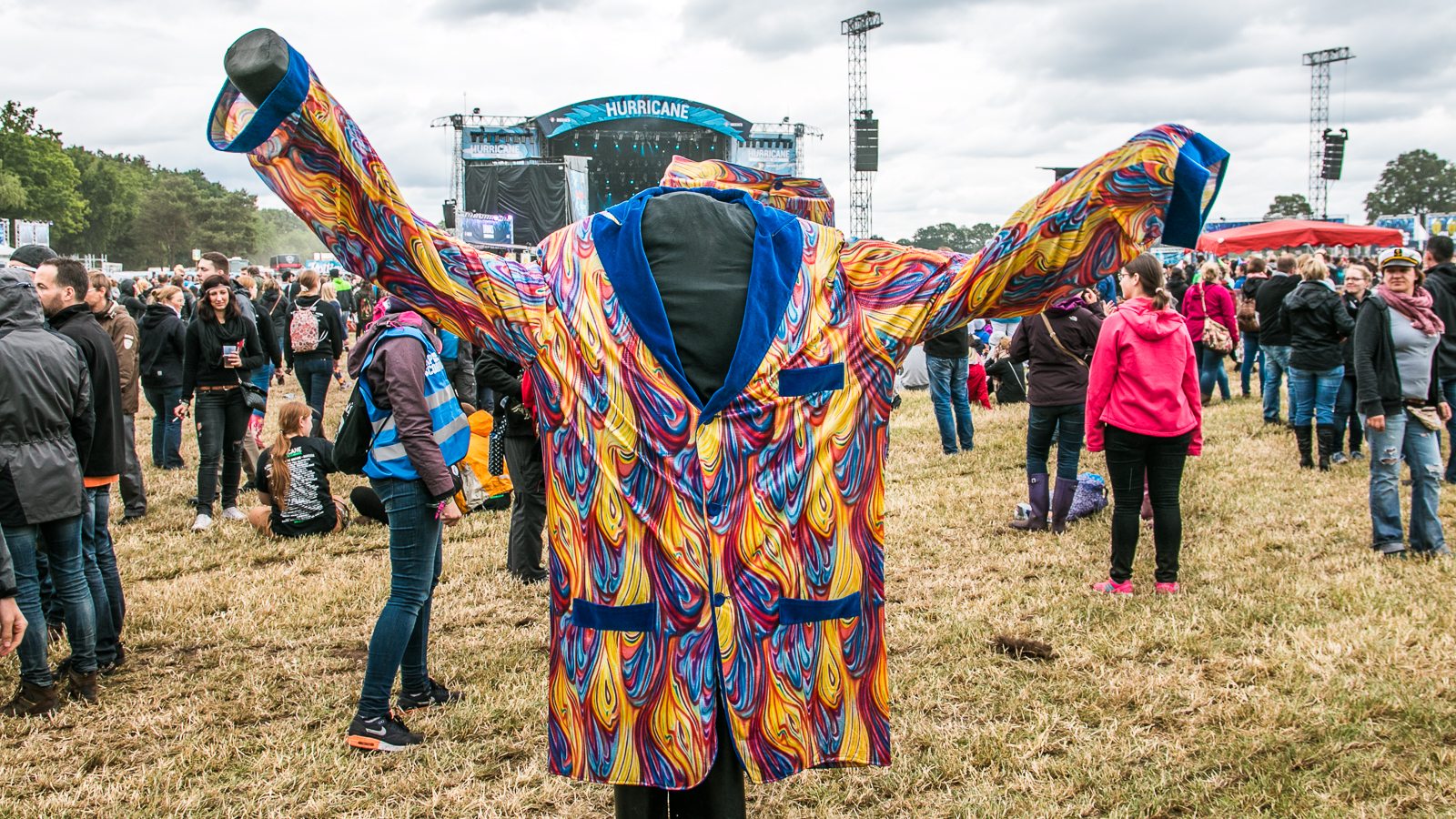 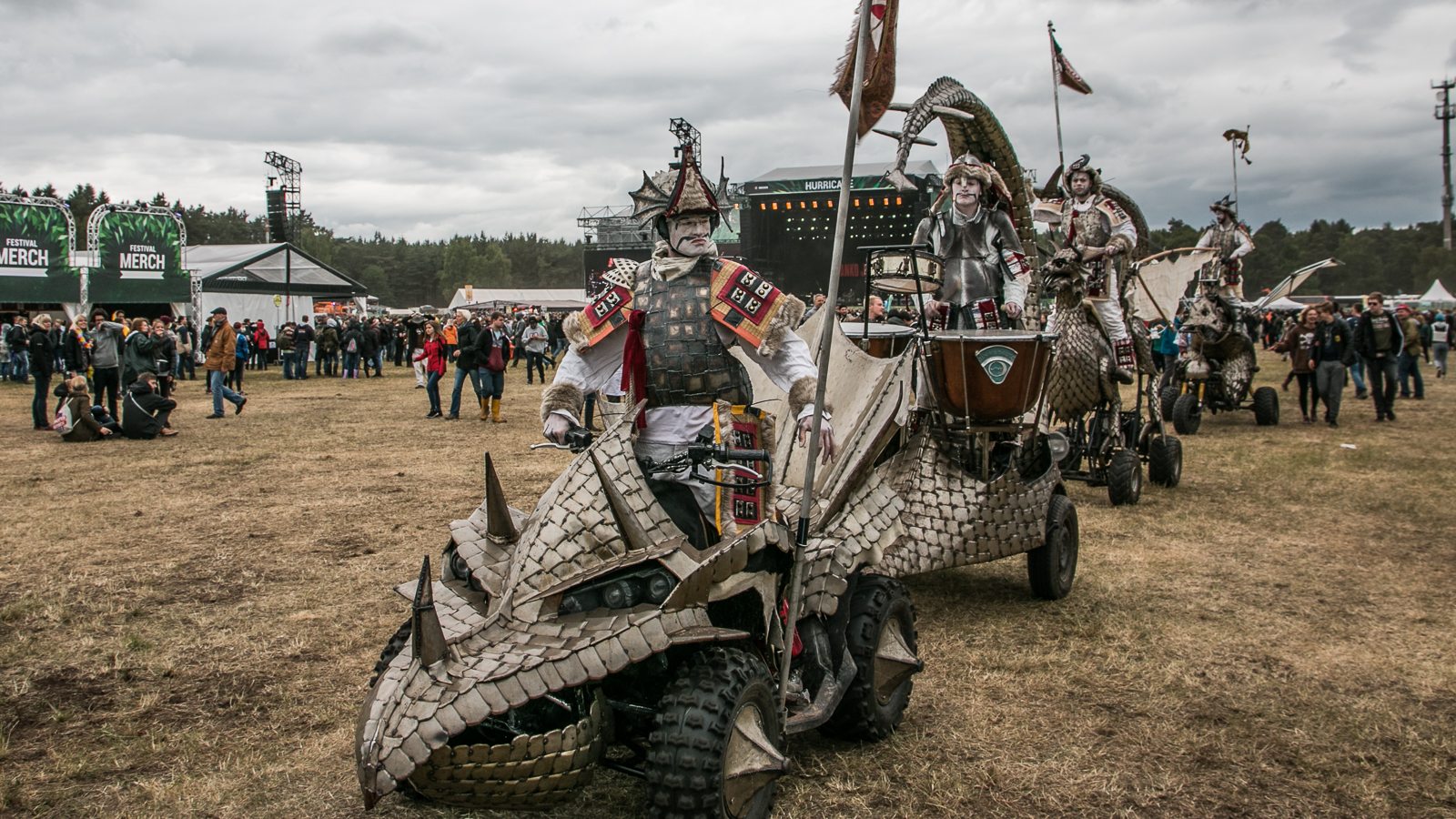 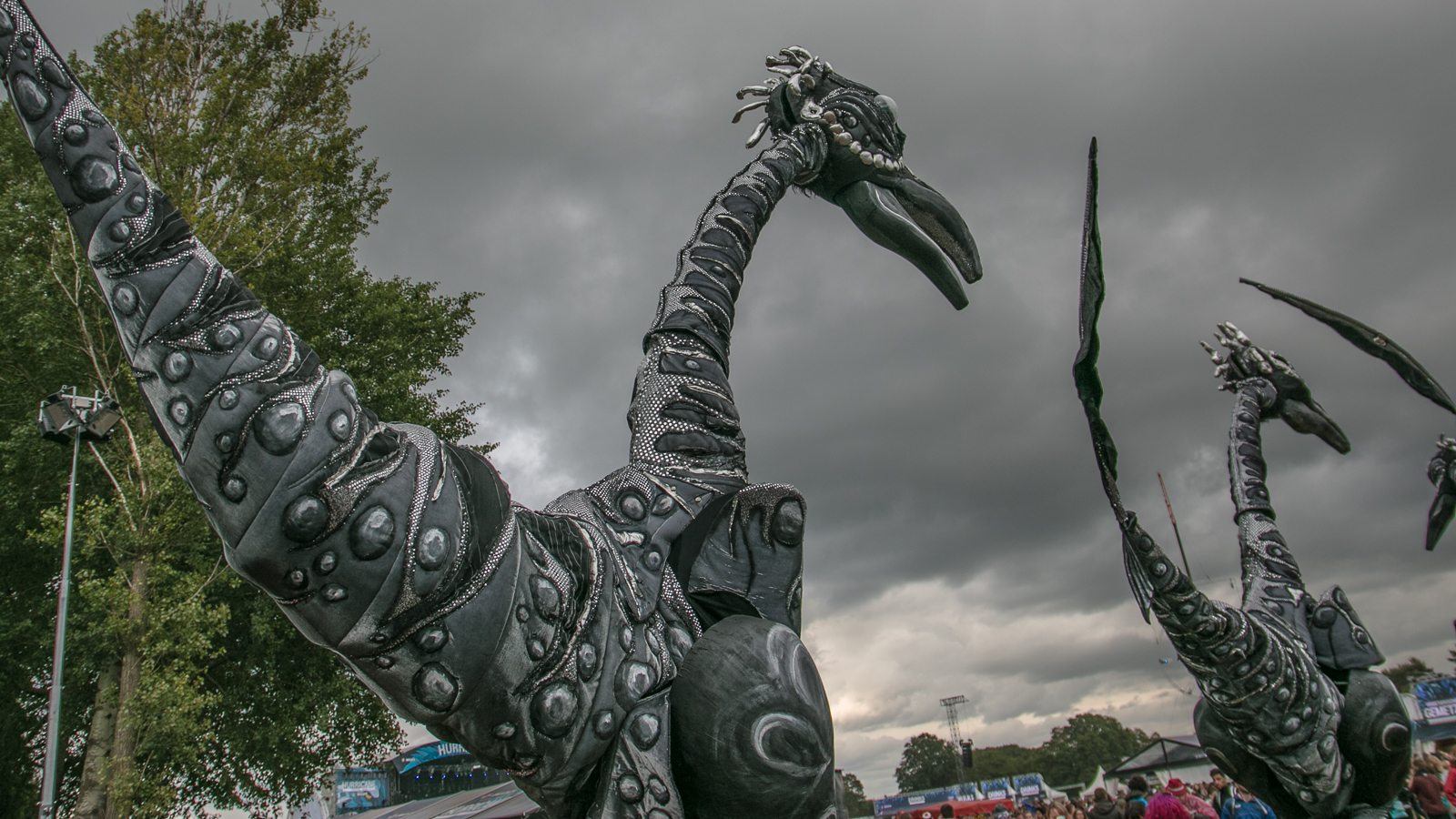 On Saturday, I embrace the true nature of a music festival reporter (a job I invented so I can pretty much make up what it entails) and fully experience Hurricane in all its glory. My only concession was to bring the camera, but I will not hang out in the press tent and work. Also, the Internet is down and it’s not raining. 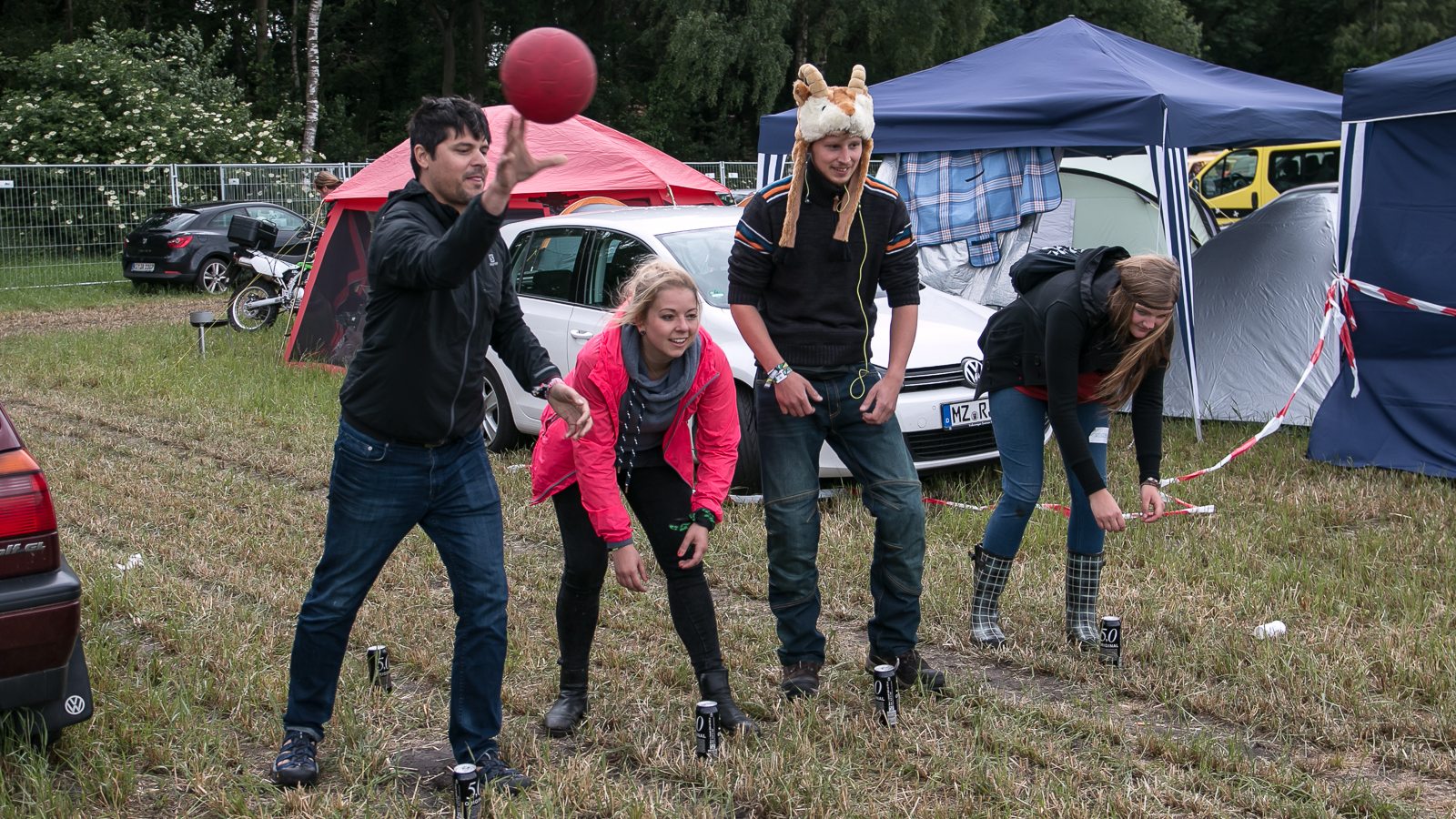 I begin the day with a slew of campground activities. Beer pong, eating hot dogs out of a can, and German metal. Everyone is astounded that I’ve never played Flunkyball which involves two teams, a red ball, and of course, yes, lots of chugging. I learn to greet people with “moin moin” instead of “guten tag” because that’s only something a southern German would say. I learn that Germans do indeed love David Hasslehoff — or at least they know how to loudly sing all the words to his songs. I learn that hot dogs in a can do not taste as terrible as I thought and that hollow hot dog buns with the ends cut off are a genius invention. I learn the words to the SDP pop song Die Nacht von Freitag auf Montag.

We run through a slew of bands on Saturday: the aforementioned SDP (I remember the words — sort of), a kickass set from Dub FX, a holy-shit-that-was-crazy Die Antwoord, the wild Farin Urlaub Racing Team, and German rapper Alligatoh. Leena occasionally translates lyrics for me: “I slept with your maid. I slept with your sister. I slept with your mom.” And then later on Alligatoh gets serious: “Racism is bad.” He’s also dressed like a Roman gladiator holding the reins to the four members of his band who all for some reason has angel wings. It feels wicked German. I’m not sure what time I go to bed. I am sure that packing only a sleeping bag liner instead of a sleeping bag was a terrible mistake. It’s fucking freezing. 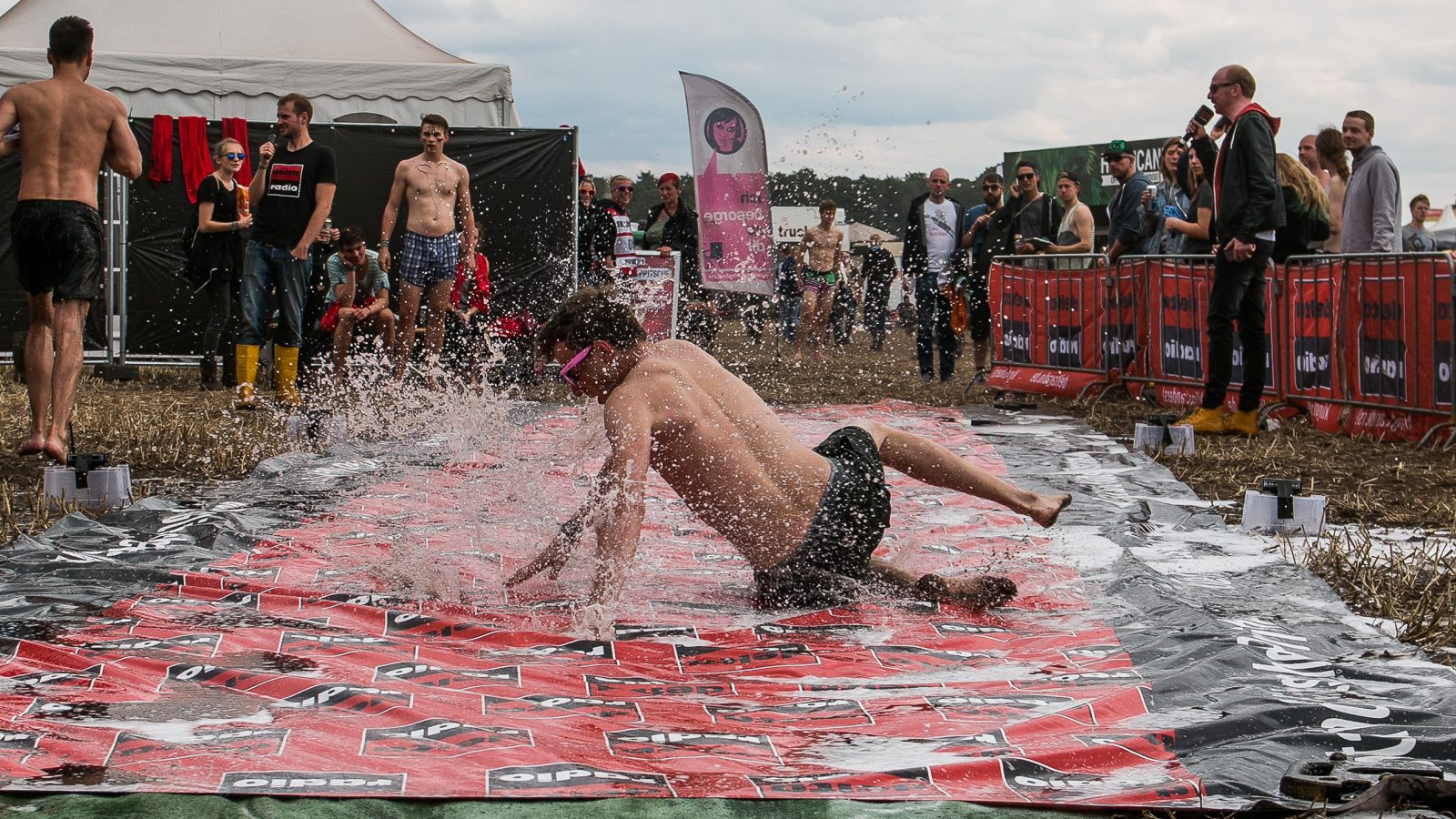 After a packed day of Hurricane on Saturday and partial frostbite (I assume) from my ill prepared camping, I’m feeling the festival burnout on Sunday. I’m not the only one. The fields are stuffed with prone bodies at two in the afternoon — festies who managed to pack up their stuff, drag themselves to the field, and then pass out for a Sunday afternoon nap. The numbers of dancing festies is significantly lower for a very loud Turbowolf (playing at a way too early 1:00pm) and the party popping Vaccines.

I head out to check out the campground scene and true to its nature, Morder lives up to its name. Maybe a quarter of the fans have packed up leaving behind a Mad Max style wasteland with wisps of smoke drifting up into the sky. Tents are busted apart at the seams, while others are being held together by tape. I see one guy sitting alone burning toilet paper over a camp stove and then I see this guy just wearing toilet paper. When he sees me he starts to undress. I quickly move on. There’s a group playing golf with full beer cans. They are hitting it into the main throughfare. 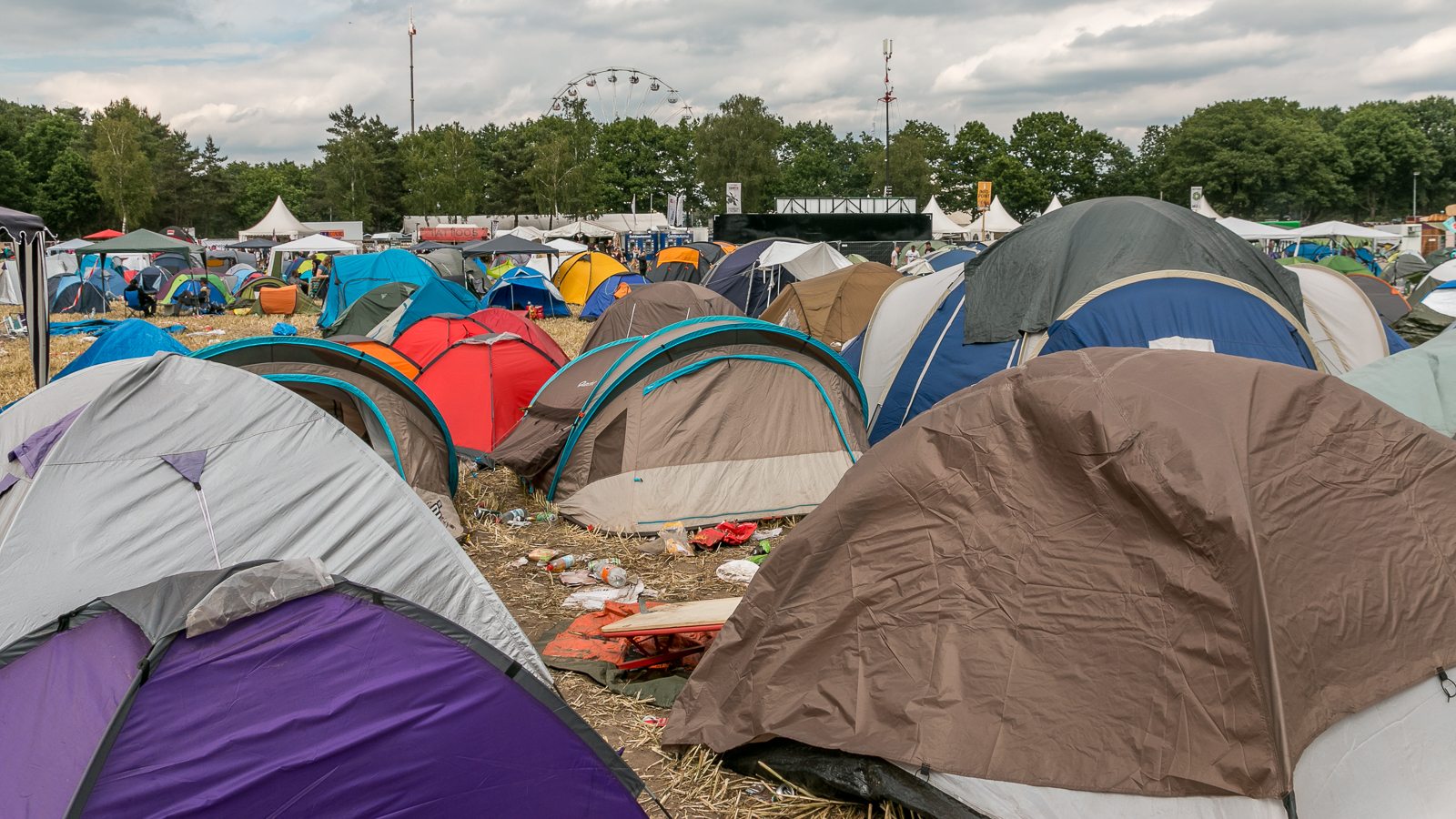 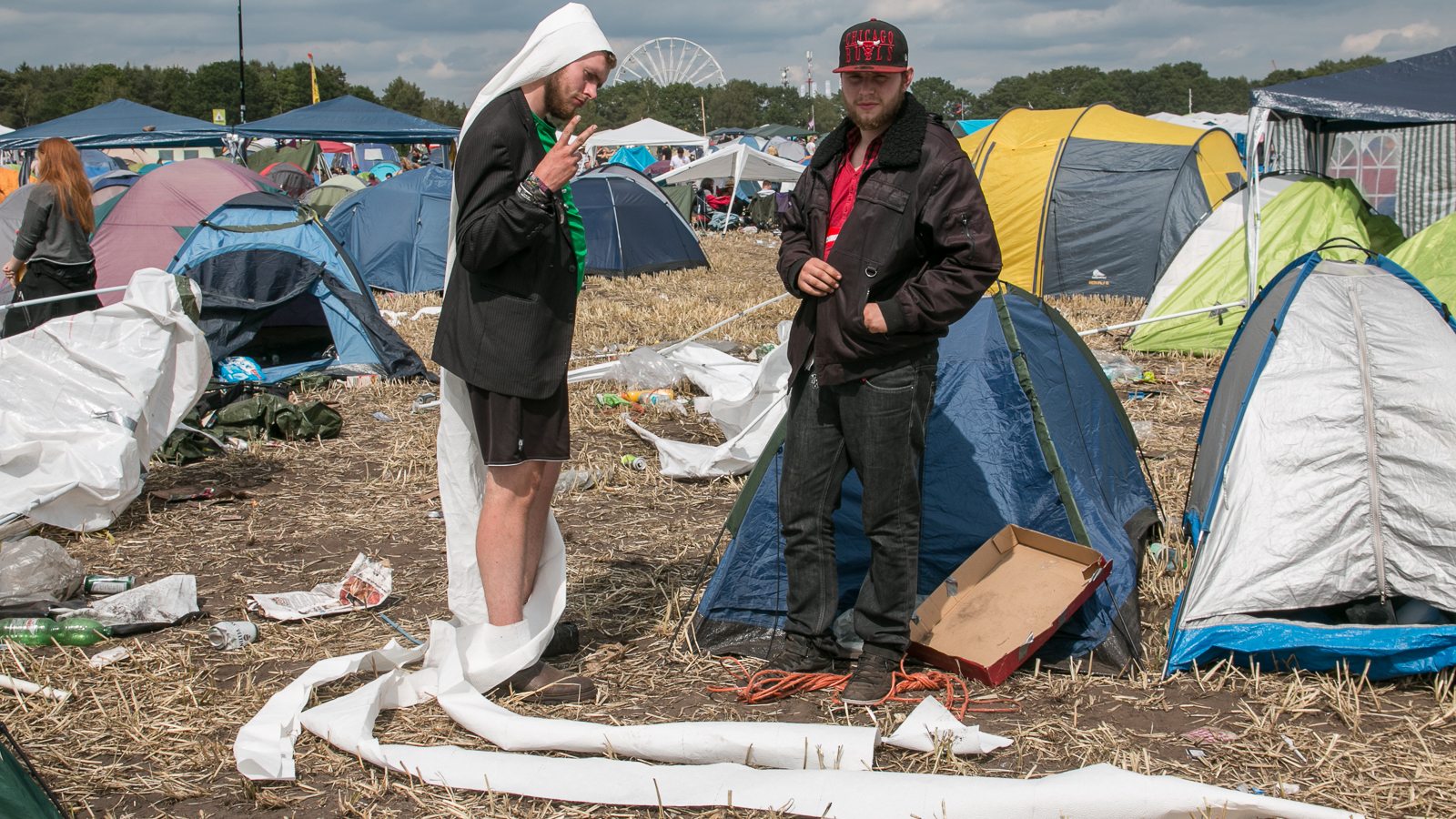 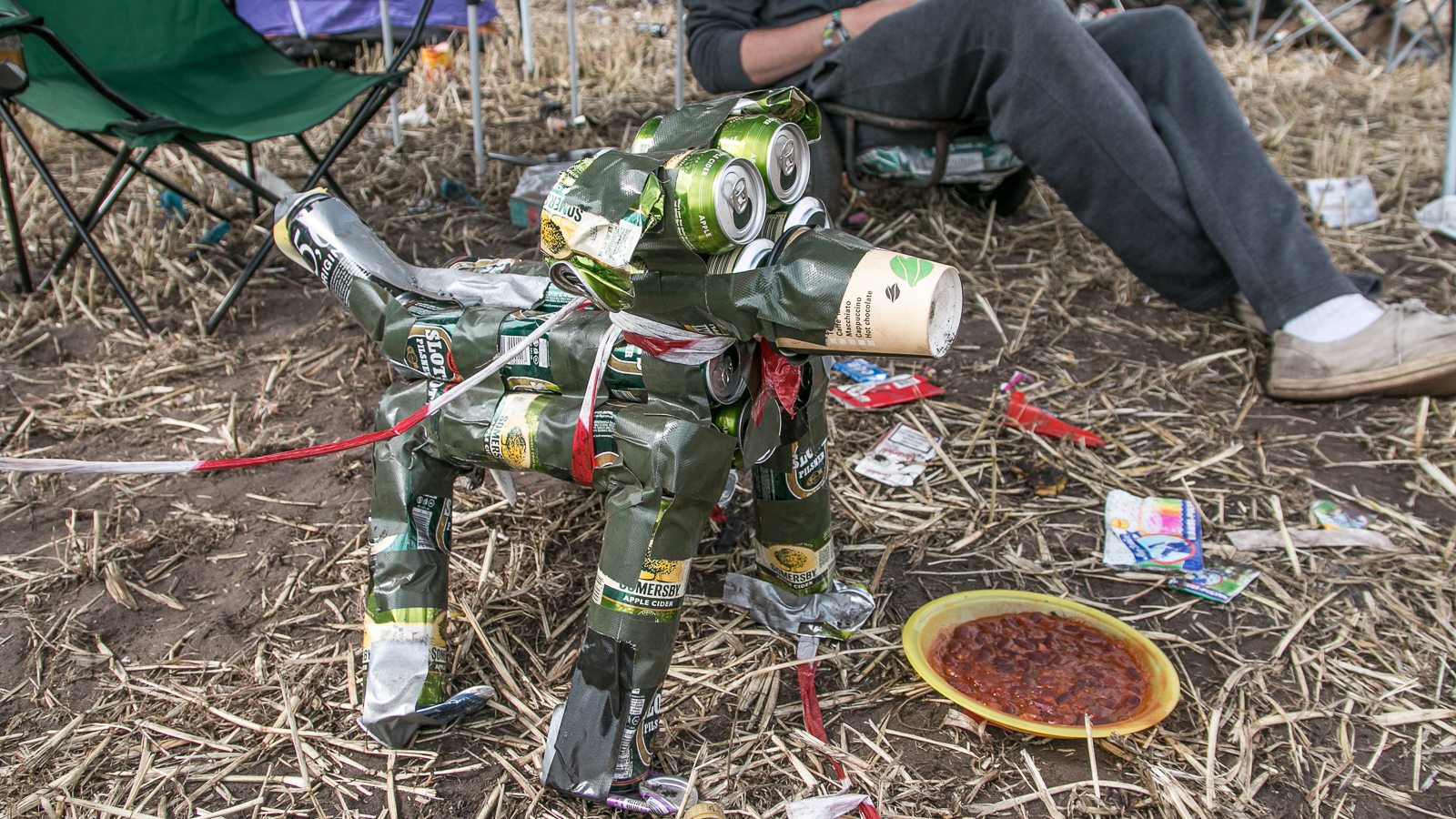 In the midst of the chaos, I find art in the form of a beer can dog. “What’s his name?” I ask the owner. “It’s Slotty.” “What does that mean?” “It’s the name of the beer. Would you like one?” His friend tells me that last night was crazy. “They lit the toilets on fire.” He takes me over to see the destruction.

Three of the porta-potties have been burned to the ground. While I’m trying to fathom how that can happen to plastic, a small blond girl tugs on my arm. “Sorry,” she says. “I went poop. And boom!” Then she walks away. 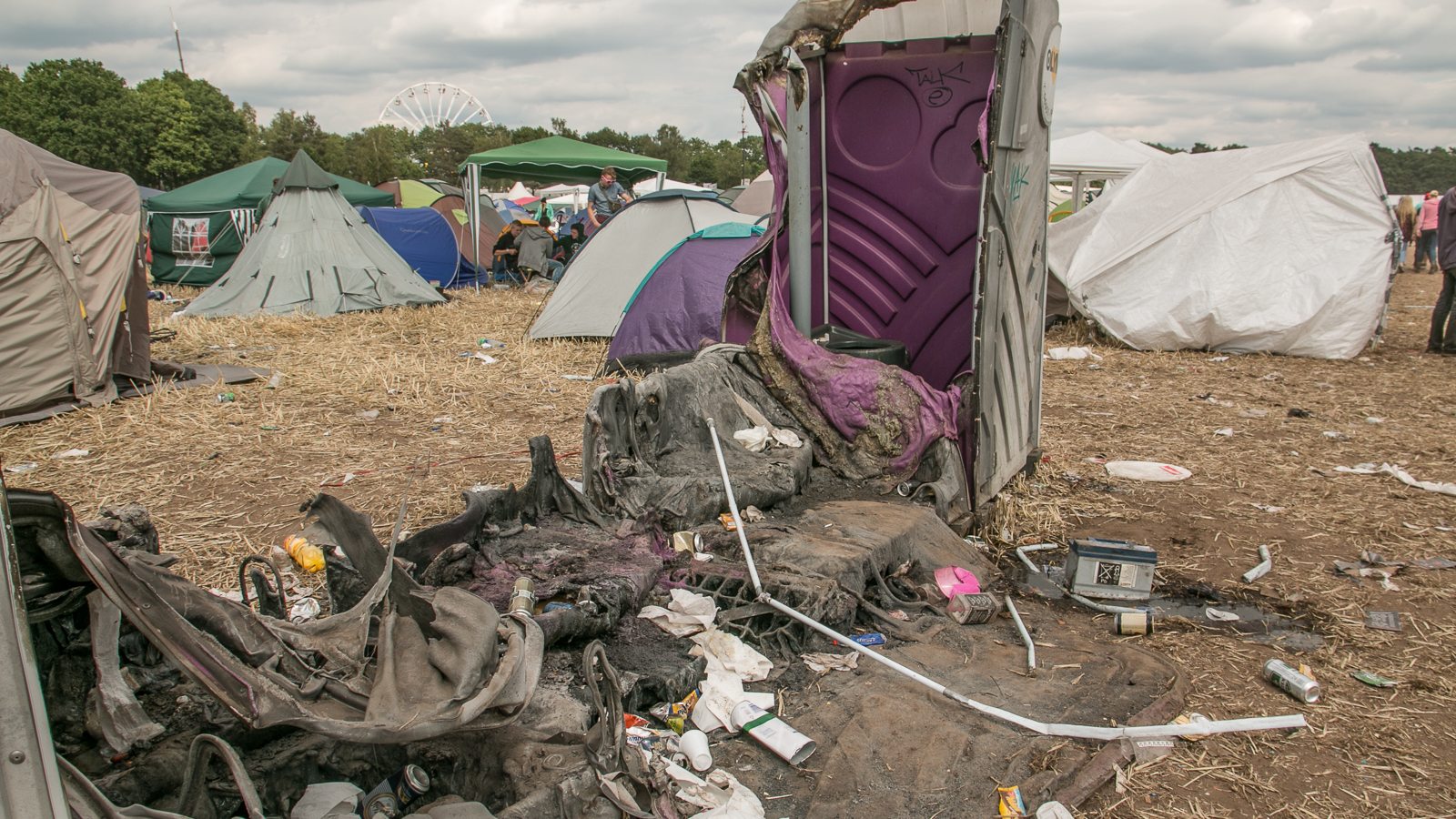 Back at the show, life is breathed back into me from Of Monsters and Men — I must see them again. We all learn why Florence + the Machine is a festival closer with her ninety minute set. As soon as she finishes the skies open up because, of course it will rain, this is Hurricane. 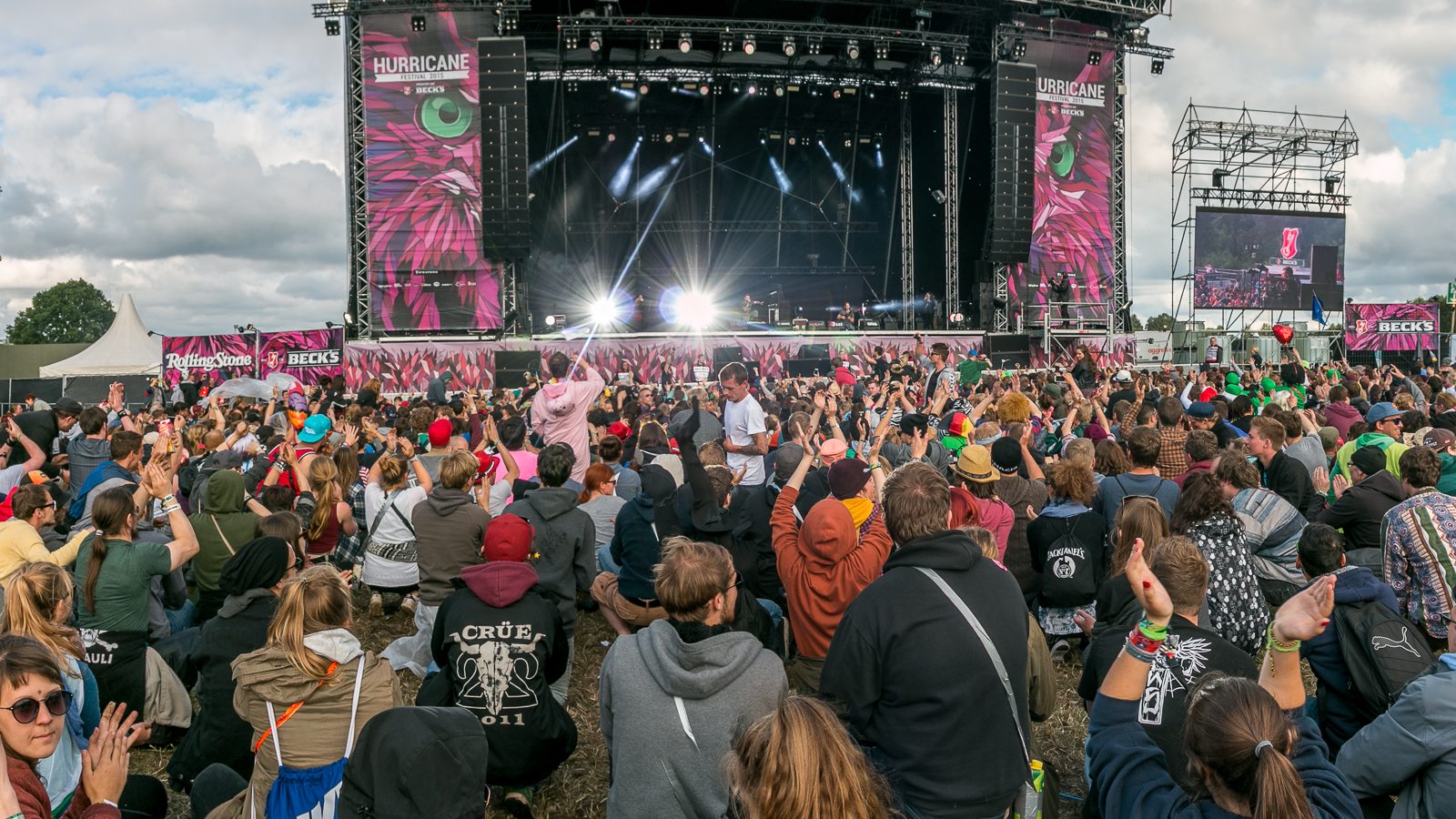